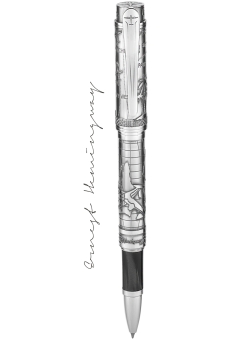 The Hemingway Collection is divided into four “chapters”: “The Soldier”, “The Writer”, “The Fisherman” and “The Traveller”. Each of these chapters of his life is embodied in a pen, offered in the three types, including fountain pen, roller and ballpoint. In keeping with the accoutrements of the era, the packaging itself has been inspired by the notebooks used by reporters during the First World War.

Each model in the four topics is a limited edition of 100 examples, totalling 300 pens for each subject. All pens in the series will be produced in celluloid with sterling silver trim or entirely in sterling silver. In addition to the silver editions, 10 examples of each of the three pen types, in each of the four chapters, are trimmed with 18k gold.
All invoke the spirit of the writer who single-handedly transformed modern writing.