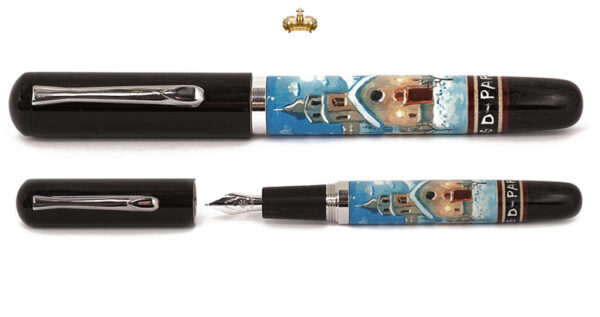 The extraordinary collaboration between D-PARMY and Marino Di Fazio, one of the best-known naïf painters in Italy, has resulted in D- Parmy's Naif5 fountain pen.
The decoration, handmade by Di Fazio on each single pen, portrays a winter landscape by night: his painting expression represents, with politeness and illusory simplicity and unquestionable candor, timeless fairy tales that “catch” the observer's glance, direct it in themselves and make it part of the tale, of the dream, of the memory.

The 15 one-of-a-kind pieces, made of Ebony hardwood with Padouk and Maple inlay works following the sophisticated craftsmanship of D-PARMY tradition, want to pay tribute to Di Fazio and the art he represents.

Intarsia
Intarsia, or inlay, is a type of decoration created by combining small pieces of wood or other materials of different colours. Already widely practiced in the 14th century, inlay reached its maximum flourishing between 1440 and 1550. Up to the end of the 15th century, inlay was an art form practiced mainly in Italy. It later spread beyond the Alps.